Only 1.6% of VC-funding in the Netherlands goes to women led ventures.

6% of decision-makers at NL based venture capital firms are women.

87% of NL based venture capital firms have zero women investors.

As reported in TechLeap.nl Bid Book ‘It’s time to #FundRight’

It’s time to #FundRight! But how to bridge that gap?

Think of a strong leader and most of us, both men and women, will think of a man.

Looking at the qualities that makes this person a strong leader, we see that society still prefers masculinity over femininity in a leader no matter if the leader is a man or a woman. However women are still facing what is called a ‘double bind’: a woman is expected to show masculine qualities will she be able to hold leadership positions. But when she actually does show those qualities, she is negatively judged for it. For example: what is perceived as assertive in a man, it is perceived aggressive in a woman.

The video of ABC news shows this double bind for women. It also shows that both men and women are biased when it comes to gender. We still have a long way to go … but there are steps we can take to actually bridge the gap. During the work session on Januari 21, we explored 3 possible steps. First step to take is: 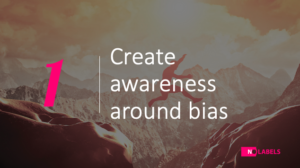 However, bias is not positive or negative. It is a human function of our brain that actually keeps us alive.

Bias is the inclination to judge without question.

The impact of that judgement can be either positive or negative. And it happens without our intention, awareness or control.

In order to bridge the gender gap, we need to first create awareness around our own personal biases.  Where does my bias come from? What did I learn, hear, read, saw, experienced throughout my life that influenced the way I view the world in general and people and leadership in particular.

This is an on-going process. You will never be without bias. That would be as if living without a brain. But when you grow more and more aware of your own biases (around gender, appearance, age, accent, name, way of talking, behaving etc.) you will be able to sooner detect bias, enabling you to take the next step: 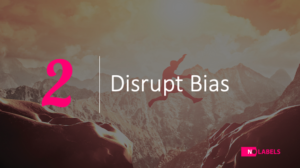 Most of our decisions are made depending on our automatic brain (system 1 thinking, as explained in the book of Daniel Kahneman ‘Thinking, Fast and Slow’). Leaving little space for our deliberate brain to kick in (System 2 thinking). Our deliberate brain can slow our thinking down, enabling us to reflect on our thinking and decision-making process.

Most of us have experienced a time where we interviewed a candidate and knowing within 3 minutes this person was not going to be the right fit. But what do we actually know of this person within 3 minutes? This is our automatic brain flipping through the files of our memory and life experiences, looking for something or someone that this person is reminding you of. And then sending a signal whether you ‘see this person perform well in this role’. But that’s only compared to what you have learned in the past with similar kind of people.

In order for us to disrupt bias we need to create more space for our deliberate brain to kick in. Enabling us to make more conscious and inclusive decisions. In other words we have to

You can do this for example by asking yourself and your team members questions. Remember, bias is an inclination to judge without questions. While talking to a woman for example you can ask yourself: “Would I be assessing her differently if she were a man?” Or if you notice you already made your decision within 3 minutes with regards to hiring a new employee or investing in a new company (whether that would be a yes or a no towards a possible candidate or entrepreneur) ask yourself: “What am I basing my decision on? Who is this person reminding me of? What else could be going on?”

Another great example of disrupting bias is the way the New York Symphony increased gender diversity within their orchestra. They put up a curtain between the candidates and the hiring committee, so they would not be distracted by the appearance of the candidates. Another thing they did was putting carpet on the floor so that they would not be distracted by the sound of the heels touching the floor.

By disrupting their biases in several different ways, not just the number of women but talent overall increased significantly.

These examples of disrupting bias are also called nudges.

Nudging is a technique that helps people change behavior without convincing them with rational arguments, setting up incitements, threatening or punishing them. It is a gentle mental push that will help the brain make better decisions.

Nudging targets the whole brain (both system 1 and 2). This will promote behavioral change and improve decision making. As we have noticed by now, just our intentions and willpower will not get us there. Inclusion and diversity is often approached on a rational level, invoking for example the business case, demographic data, or the diversity of our company portfolio. It is easier to resist change when it is positioned in a dry numbers-only manner. In order for us to achieve commitment to change, we need to appeal to the whole brain, using specifically designed approaches, which are called nudges.

How to nudge towards more gender diversity? Here are 4 examples:

So far, we have discussed the importance of creating awareness around our own biases and disrupting them. The 3rd step we can take to bridge the gender gap is 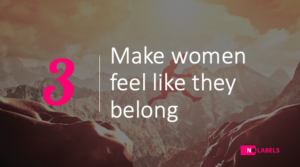 Furthermore, what do women see, read and hear when being introduced to your company? Whether that is online checking your website, walking into your company or reading an article or open job position. Do they see a broader perspective of leadership? Do they see female role models in leadership positions? Do they read a combination of feminine and masculine qualities and language in job openings and other articles (as opposed to merely masculine)? And during meetings, is every voice, every opinion truly heard?

To summarize, the steps we can take to bridge the gender gap are: 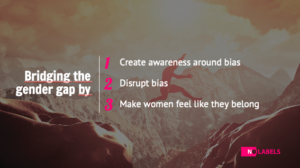 Which step are you committed to take?

We closed the session with writing down the name of strong female leader, ending up with around 45 names of women leaders. We should continue to talk about them, using them as role models, reframing the imaging around leadership.

I truly believe that when each and every one of us is willing to continuously create awareness around personal biases, start disrupting them and make women (and all minority groups for that matter) feel like they belong too, we can bridge that gap and create equal access to leadership positions and funding opportunities for all entrepreneurs.